NSE Composites was contracted by Spirit AeroSystems to support the development of a stand-alone, rapid analysis tool for evaluating the residual strength of stiffened composite panels with a central notch severing one skin bay and a central stiffener (large notch). The objective of the project was to develop a closed-form analysis method for use during preliminary design of composite stiffened panels representative of commercial transport fuselage structures. The analysis tool was a Spirit deliverable to the NASA Advanced Composites Consortium (ACC).

NSE Composites was contracted by Fokker Aerostructures to provide structural analysis of a stringer runout subjected to impact damage. The project was in support of the Thermoplastic Affordable Primary Aircraft Structure (TAPAS) program. Specific areas of support included:

NSE Composites was contracted by Fokker Aerostructures to develop a damage tolerance analysis method for predicting the structural capability of an innovative thermoplastic (AS4/PEKK) fuselage panel with large damage. Critical damage scenarios for axial and hoop loading were considered in which a central stiffening member is severed to simulate large in-service damage. The project was in support of the Thermoplastic Affordable Primary Aircraft Structure (TAPAS) program. Specific areas of support included:

NSE Composites provided support to Boeing and the Composites Affordability Initiative (CAI) in the development and validation of interface fracture elements for the simulation of composite delamination onset and growth. Boeing developed an ABAQUS user element that implements the Virtual Crack Closure Technique (VCCT) in a novel way where both the critical release force and the energy consumed during strain softening is calculated based on fracture mechanics criteria.

NSE performed work to validate the interface element over a range of structural configurations. Results were compared with closed-form solutions as well as with test data, when available. NSE also helped to extend the interface element technology to predict damage growth under cyclic loading (fatigue). The resulting implementation enables the use of the VCCT interface element to perform either fatigue onset analysis or progressive interlaminar fatigue growth analysis.

NSE Composites was contracted by Boeing Research & Technology-Australia (BR&T-A) to provide engineering support related to the enhancement of analysis and optimization tools for composite structures. Specific areas of support included:

NSE performed detailed analysis and finite element modeling to predict the strength and fatigue life of a developmental bonded composite structure. The purpose of this work was to apply the analytical methods previously developed under an Small Business Innovation Research (SBIR) project (A98-029) to assess damage initiation and growth due to static and fatigue loading in the selected areas of the structure.

Generalized plane strain finite element models were used to determine the stresses and strains in the adhesive and the composite laminates. Strength-of-materials failure criteria were then used to predict critical damage initiation loads and locations. Fracture mechanics methods were used to predict static strength and fatigue life based on fracture toughness and crack growth rate test data.

The strength-of-materials analysis identified three critical locations for damage initiation: 1) fiber failure in the hat radius, 2) delamination of the bulkhead flange on either side of the outer glass/epoxy ply, and 3) disbond/fracture of the adhesive fillet between the hat and bulkhead flange. 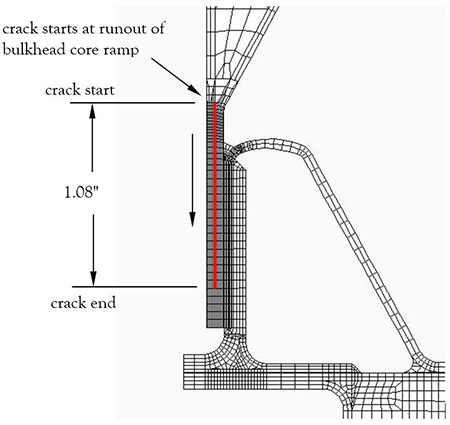 Fracture mechanics methods were then used to assess the static strength of the test article. A single crack path at the midplane of the bulkhead edgeband was chosen for the analysis. The crack was introduced into the model through the use of duplicate nodes and constraint equations which were progressively released. The model was run for a series of crack lengths to generate strain energy release rates as the crack was opened to a length of 1.08″. Total strain energy release rate (Gtot) and mode mix (GII/ Gtot) vs. crack length were calculated. The multiple load steps from the non-linear FEM provided Gtot data at several load levels for each crack length. Assessment of static strength and crack stability as a function of crack length were made by comparing Gtot from the model to critical fracture toughness test data (Gtot, crit) at the appropriate mode mix. The analysis showed that the predicted failure load is well above the test article failure load and that a crack or flaw is not predicted to grow at this interface at or below this load.

The onset of delamination due to fatigue loading was then evaluated at the same interface in the bulkhead edgeband. The peak value of Gtot over the length of the crack was calculated at the maximum cyclic fatigue load using the Gtot vs. crack length data from the FE model. This G value was then compared to Gonset vs. N data to assess the number of cycles before the onset of delamination.

NSE Composites performed an R&D contract for Bell Helicopter Textron Inc. to help Bell advance the state-of-the-art in strength analysis and predictive modeling of composite structures. In this contract, engineers at NSE Composites used advanced computer modeling techniques to evaluate the strength and durability of composite structural elements. The commercial finite element software, ABAQUS, was used together with advanced fracture mechanics approaches to predict the onset and growth of flaws or damage in the composite material when subjected to static or fatigue loading. The structural elements were then tested under the same loading to provide a comparison with the computer predictions. In support of the model development, element tests were conducted to provide baseline and validation comparison data.